When this project started, Matthew was one of the few people I knew I had to interview. He spoke at a camp I volunteered at 7 years ago and I remember feeling my mind expand a little during his sermon. His unique mix of experiences with poverty and affluence and his dedication to history and the Bible excited me. This interview didn't disappoint. If you listen closely you can hear the sounds of his children during his pauses as he walks me through complex topics that speak to America right now, what America was and what it might become.

On his name
"Matthew means gift of god. my dad was a pastor and I'm pretty sure he was doing a sermon series about the Gospel of Matthew when I was conceived. So they named me Matthew, which is kind of funny because my job now is to think about the Gospels."
On growing up a pastor's son
"When I talk about my childhood there's kind of two portions. For the first part, we were very poor. My dad was a pastor. He was a church planter and not connected to a denomination which meant he was starting churches without any denominational or financial support. I think he said he made somewhere between 15k and 18k, for a family of five. We were profoundly poor.
I didn't have a new pair of clothes that wasn't handed down or bought at a garage sale until I was about 10 or 12. We lived in this small old house across from a power plant and I remember seeing my landlord all the time and feeling very aware that other people owned houses and our landlord was always checking on us.
The power plant had power lines running north and underneath them was this massive field that went on for miles. We used to play baseball under the powerlines, using the brick wall of the plant as a backstop. So anytime you fouled a ball, it went over there. We must have lost hundreds of baseballs over the years.
Then my dad started the company with his dad, it took off and we went from extremely poor to pretty well off. We moved from our home to this super-rich neighborhood. It was kind of jarring. We had a hot tub and were going to private school. We went from a tiny old house with dark brown carpet because it was probably just dirtier than I can imagine but was easier and cheaper to keep there. And a neighborhood with strip clubs and liquor joints to this gated community." 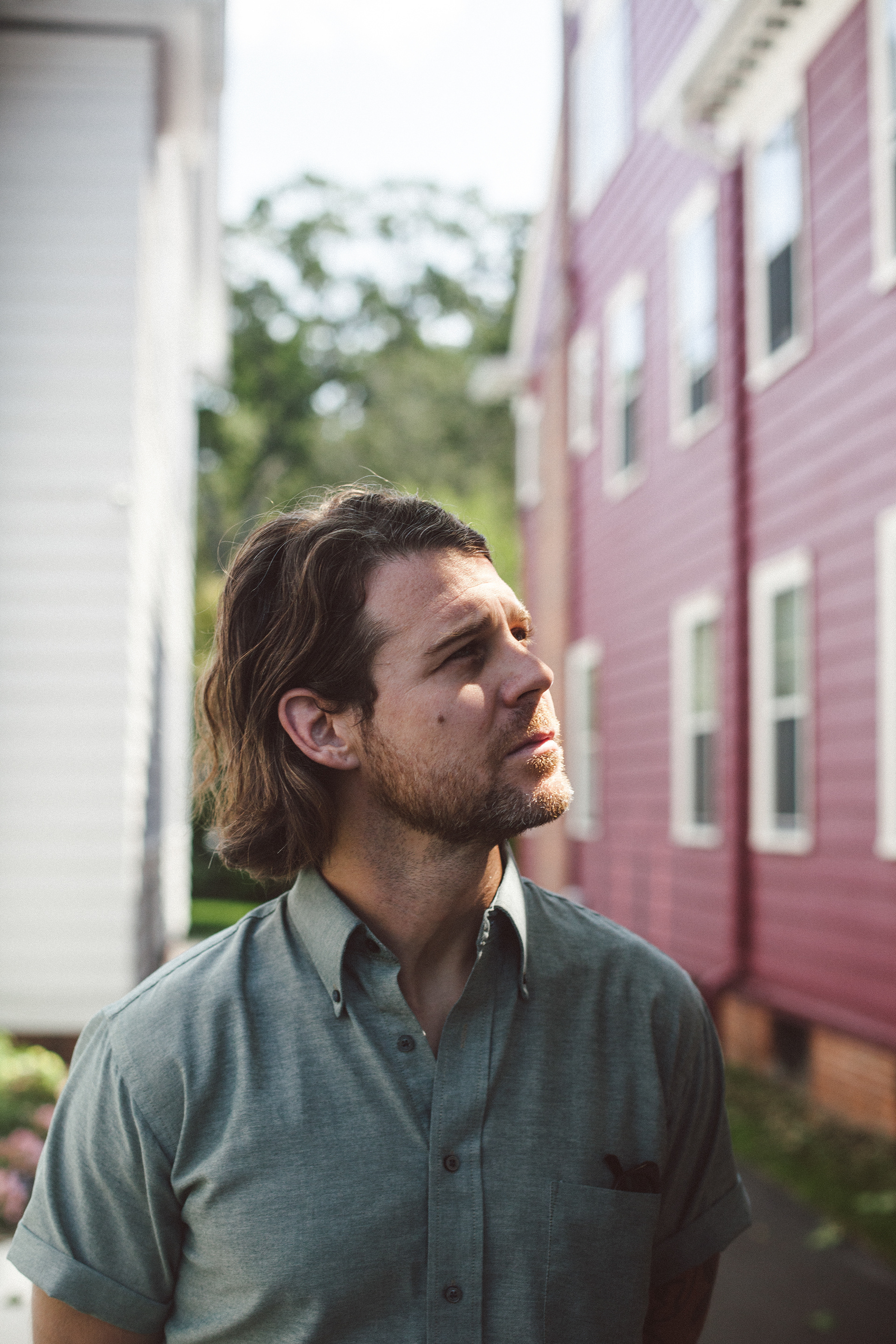 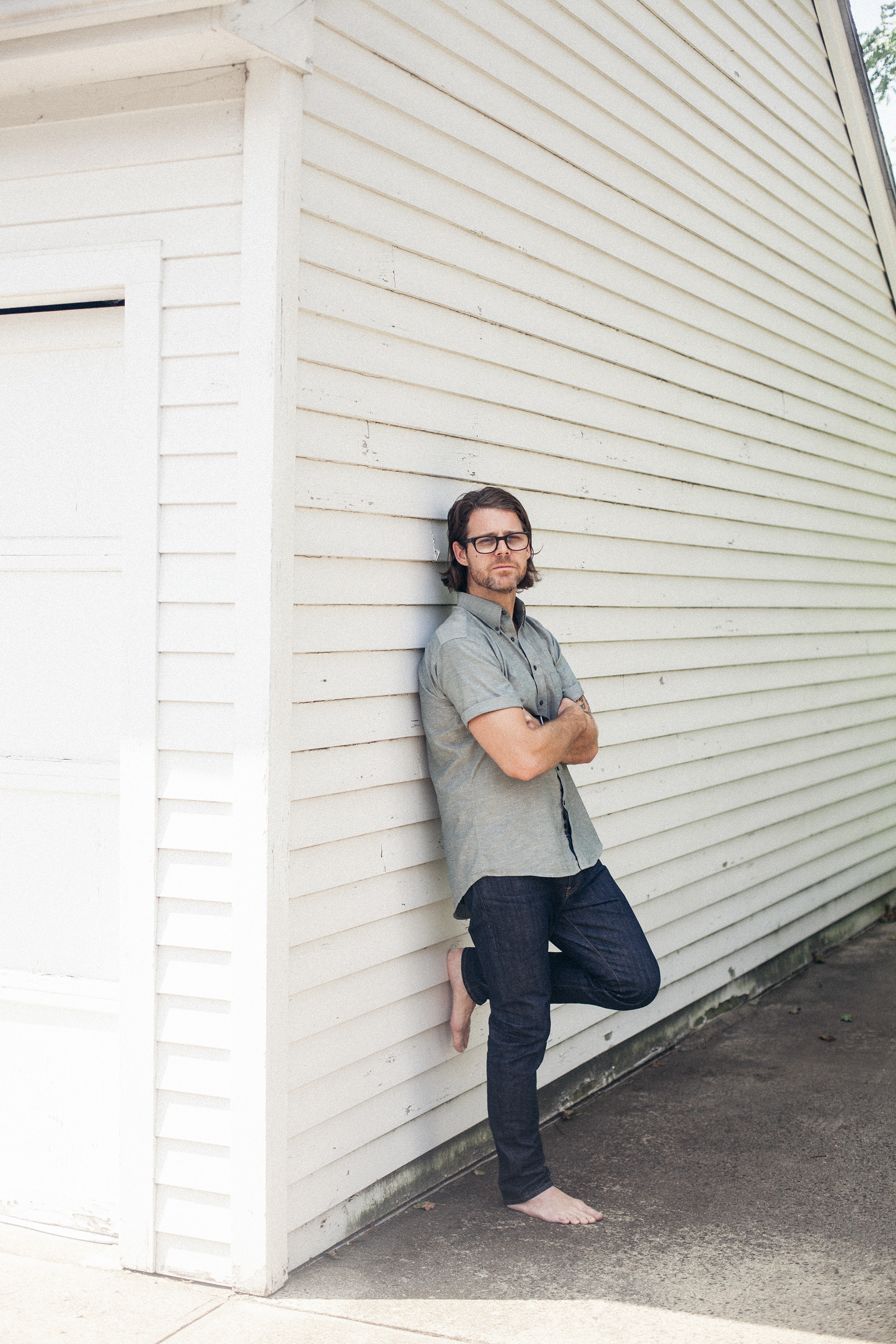 On the bible
"When I was in college, I was on the football team and got an opportunity to be chaplain of this organization. I decided I'm not going to play football much longer and this might be a career possibility for me. So I tried it out and I loved it. I went to seminary after that.
They taught me how to read the Bible from a specific angle, as an ethical handbook and theological handbook. As I used it for that, the system completely dissolved in my hands which led me to some real existential questions about faith and about what it means to use the Bible. Ultimately what I'm interested in is how people use the Bible. That led me to really do some thinking and a lot of reading about what is the role of history. Why do we care about history? I decided that I wanted to go in a more academic track with my training which led me to come to Yale to do a Ph.D. and that's how I got to New Haven."
On history
"Understanding the history of our country helped me to see that there never was a moment when America was pure. To use an example, the founding fathers. Are the founding fathers as exemplars of life that we should reach toward? Did they found a country based on freedom and liberty and the pursuit of happiness for all people? Period, that's the end of the sentence? If that's the case then maybe we should try to back to that. But if we historicize them, then you have to address things like the  Monroe or Madison I think it was Monroe who l wrote in the in the founding documents of our country that a slate has three-fifths of a person. How do you do that calculus?
You kind of you kind of historicism these people and realize that that was not a great moment. Maybe it wasn't a great moment for like white guys but it certainly wasn't for women or people who are not white males. Brian Stevenson just came here and spoke and said, "when I hear Make America Great Again I don't know what period of time they're talking about." For me it all comes back to my vocation: a real contextual and cultural understanding of history pushes me to say we have not yet achieved our country and that is something that we need to fight for.
In George Orwell's 1984 there is a quote that is something to the extent of, "The one who controls the present controls the past and the one who controls the past controls the future." The past doesn't exist in the same way that the future doesn't exist but the past matters because it's our way of kind of triangulating how we're going to get to the future.
We're seeing a lot of people now in the Trump era taking power and re-narrating the past as a way of dictating what the future should look like. So I think the ideological divide between a conservative, in the true sense of the term, not the kind of politicized sense and progressive, in the true sense of the term, has to do with who controls the present and how they narrate the past."

"The past matters because it's our way of kind of triangulating how we're going to get to the future."

On socialism
"One thing I do think it's fascinating is our very intense aversion to the word socialism.  There's a lot of layers to why that word is so demonized and much of it has to do with the past. Because of our feelings about Russia and the Cold War in particular.
When I first came to New Haven I had someone knock on my door and say, "I understand you're a part of the Democratic Party because you voted for Obama or for Democrats." "Actually," I said  "I'm more of a socialist. But given the current landscape, the Democrats are usually a better bet for that." He just looked at me and said, "Wow, after the Cold War and WWII, I didn't think there were many of you left." And I was like, "oh okay, you're conflating 20th century communism with Marxism and socialism."
Isn't it interesting that those words are interchangeable to the user? Especially in America where we are all already socialists in some sense. We have social security and other programs that are based on socialist ideals. I believe there was this article in Newsweek called We Are All Socialists Now, that illustrates that we are already there as a nation, it's just a question of degree and how we go about executing it. Which contrasts heavily with the anti-socialist narrative of like keep the government off my Medicaid for example. I think its important that person understand that the very system of providing care for people over 65 is a socialist program."

When you're a kid and you play dodgeball, you always start with equal sides. As the game goes on, more people get out and so you end up with like 10 people over here throwing out like two. And then one over here. Imagine once you've gotten to that moment, you're on the side with two people, and the coach says, "hey, whoever wins the game is going to win." Ninety-nine times out of 100. What's going to happen? The side with two is going to get crushed. That's just the way it is. That's where we are starting from in our society right now in terms of equity.
Thomas Piketty, who is a French economist, wrote a book called Capital in the Twenty-First Century where he lays out the data behind capitalism. In it he shows that in capitalism, the people who have money get more money. And the people who don't have as much get less. That's the dodgeball principle, he didn't say this, but I am. It just continues to grow. He points out that this is the way capitalism works. Insisting on equal competition with unequally resourced parties is not the fairest things to do in the world, in fact, it's one of the least fair things you can do. That logic lets you perpetuate the idea, "look we fought and we won again which means we are superior, we must be because we always win." It's easy to get from that to understand how racism and sexism are just built in. It's not like one creates the other but they're symbiotic."
On true freedom
"I have heard attributed to the early rabbis but it comes from either Micah or Amos. True freedom is every person under their own shade tree, on their own land, with enough to eat. That's what Shalom is, peace. That's what came to mind first. Just the freedom to exist in harmony with others because you already have enough. "

"America always seems to kill its black leaders at a moment in time when they both recognize the interrelationship between race and economics."

On why humanities matter
"The influence on S.T.E.M. and the decline in the humanities is connected with where we are as a country. The irony of that is we should reverse it because STEM knowledge ages poorly.
I remember reading a report from someone who works in Silicon Valley, saying that the shelf life of STEM skills is diminishing at a nonlinear rate. It's getting faster and faster. So like you go take an electrical engineering class or a software engineering class and the skills you're gonna learn will be obsolete within 24, 18 or 12 months. Why why are we pushing our young people to learn skills that are going to be increasingly obsolete and replaced by machines? What I think I'm trying to do with my work as a scholar and as a teacher is to teach people how to look at complex systems that you can't see, touch or taste but know are real and have agency in the world. My goal is to give them the tools to be able to talk about and critique that and to remake it into something that is more productive for the human race. That's something a machine can't do. Why are we not teaching people how to do that? How to learn from the past in the name of creating a more just future?"

the proximity of #metoo

Pisha W.
↑Back to Top